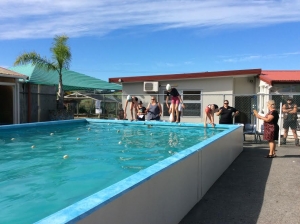 On Tuesday fourteenth of March at ten o’clock in the morning it was SWIMMING SPORTS at our school. First year four, five, six, seven, and eight got changed. Next we did the competitive swimming first. The first year to go was year eight. Everybody was so loud my ear drum nearly popped. When it was my turn to go I felt like I was going to be sick.

As soon as I heard the clap of the two wood blocks hit each other I knew that I had to go after that I had to get my towel. After I did freestyle I had to do breaststroke.I had came second in freestyle first in breaststroke and second in backstroke. After the competitive swimming we did non-competitive swimming. Everybody that did non-competitive only did one lap. After the non-competitive we all had lunch. There were sausage sizzle,including cans for sale. After that the year three laps,they only did one lap then they moved on to the year one and two which they did a race to the rope and back.

Then Cooper, Leah, and Ava did one length of the pool and guess what they are only FIVE YEARS OLD! After them we did relays. The people that did the relays in Kereru were me, Lyric, Isaac, Matthew, and Sarah. The group that came first was Tui second place was Kereru and third was Ruru. After that there was a race against kids vs teachers all the people that vs the teachers were the fastest people in our  school who were mostly all the seniors. It was pretty funny watching them race. At the end when all the races were done everybody jumped into the pool for a free swim. It was so loud like a herd of noisy elephants.

About the Author: Jorja Walden

Search for an Author